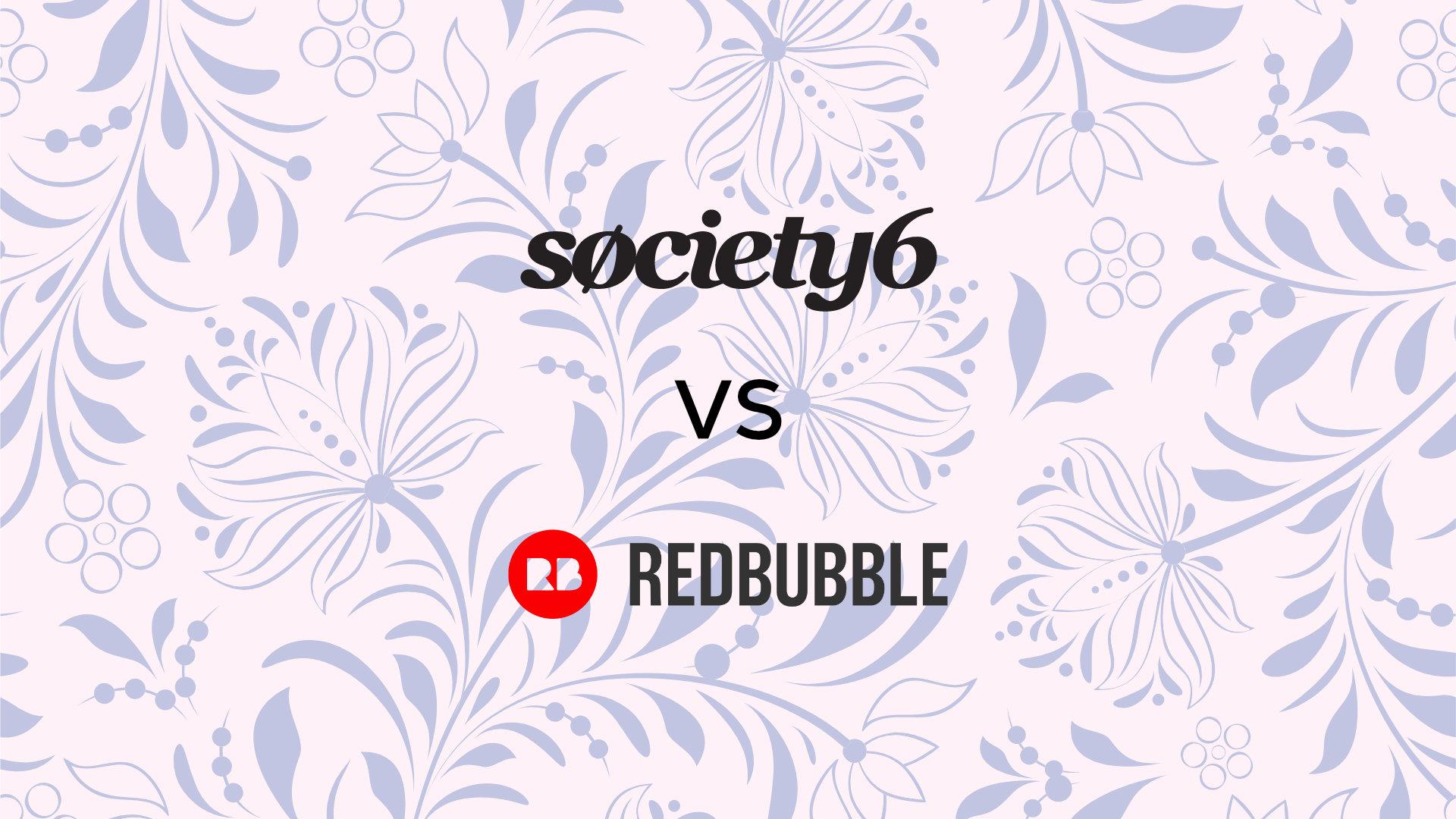 For artists looking to monetize their creative talents, both Society6 and RedBubble sound equally appealing. In a saturated market, both offer budding creatives a way to get their work seen without paying for a gallery spot - but which platform should you use?

RedBubble and Society6 are both online marketplaces where goods get printed on demand (i.e. when a purchase is made).

As an artist, you retain full rights over your work while the platform brings your designs to a wider audience - giving you a cut of the proceeds.

The basic process is as follows:

While both print on demand platforms use a similar design-to-dispatch process, the nuances between the platforms lie in the marketplaces, artist experience, artist margins, customer service, and management tools.

RedBubble is publicly listed in Australia, while Society6 is privately owned by the Leaf Group. While they have never admitted it publicly, society6 was likely started to capitalize on the market RedBubble popularized.

Here are the key differences between their marketplaces:

While both RedBubble and Society6 give customers a similar experience, the true artist experience is a shrouded affair. To determine whether society6 or RedBubble should be your go-to platform as a seller, let's compare them in more detail.

As an artist, your control stops when your art is uploaded. Both RedBubble and Society6 print, pack and ship the product to the customer without your help.

The principle of uploading artwork is simple on both platforms. You simply upload files from your computer and a title, custom tags, and description for customers to see.

Society6 used to have a frustrating and outdated product builder, but recently (to the joy of many designers) released a new one.

When comparing the usability and product catalog of the two platforms, Society6's new artist studio has the edge. Here's a breakdown of the key differences:

1. Society6 lets you upload multiple versions of the same artwork

For comparison, RedBubble’s artist studio requires you to add each variant of the same designs individually. They are treated as separate designs. If, for example, you wish to use different versions of an image for different products, you'll have to painstakingly follow the upload process again and again.

Society6’s new artist studio is a tad better than RedBubble’s, but it’s still no photoshop. Their image editor does not allow artists to change anything except image size and placement, and file sizes are limited to 150MB.

In the beginning, each platform had its own set of unique products. Society6 had exclusives like clocks and shower curtains, while RedBubble had metal prints and tote bags.

However, now both websites boast equally impressive product offerings and there isn't much that separates them. It's becoming harder and harder to name products that exist on one platform and not the other.

There is, however, one category where Society6 one-ups RedBubble: Furniture. Society6 lets you place designs on full-blown furniture, like credenzas, bar stools, and coffee tables. (NB: Society6 furniture is only available in the US.)

3. Society6 Lets You Apply Each Design To More Products

If you’re a mature content creator, Society6’s website might not expose you to the audience you want, as their mature content standards are much stricter than those of RedBubble. If your work is deemed too mature, your store could be terminated without notice.

Neither RedBubble nor Society6 allows artists to directly communicate with their customers, meaning the only way to build your customer base is to stand out from your competition with a killer print on demand store. When it comes to online store management, you’ll have an infinitely easier experience with RedBubble. That’s because RedBubble allows sellers to...

Both RedBubble and Society6 allow artists to customize their stores with profile images, banner images, and artist biographies.

On RedBubble, you are allowed to add links to social media profiles into your profile, while Society6’s terms and conditions ban artists for directing traffic off of their website.

RedBubble also allows artists to manually customize their storefront catalog. Artists can move products into any order they like and choose ‘feature’ products to prioritize. While Society6 also uses ‘collections’, products in each storefront are automatically sorted using an algorithm that lists the most popular and profitable products first.

RedBubble has hinted at implementing themes and further customization, but neither platform allows CSS customization yet.

While you’ll never know the identity of your customers, considering their perspective is still important. RedBubble operates in over 160 countries, with sellers allowed to run their stores in English, Spanish, German, and French. Society6 only permits English on their platform, but also have an alternative German website.

Society6 ships to customers in over 25 countries, but they only sell in US dollars. For international customers, this means that they won’t know the true cost of your products until they look at their bank statement post-purchase. As a result, Society6 isn’t very popular in Europe and Oceania - which are very profitable markets for RedBubble.

While there are nuances between the artist experience on RedBubble and Society6, the largest difference between the two platforms is their pricing system.

Despite the websites having similar pricing models, RedBubble's is more generous towards sellers for three main reasons.

RedBubble lets sellers decide the price of each of their products. A suggested profit margin is 20%, and most sellers set the profit margin between 15 - 25%. However, you are free to go lower or higher.

While Society6 allows custom artist margins on art prints, framed prints, and canvas prints, ALL other products have a predetermined artist margin of 10%. That margin applies to some of the website’s most popular products, including stickers, pillows, and clothing.

If an artist lists a design on both sites, they will always earn around 5% more from RedBubble, given a product with the same retail price.

Society6 can choose to run a discount whenever they like, whether it’s specific to certain stores or website-wide. During a discount, the website will reduce your artist margin WITHOUT alerting you - making it difficult to rely on the platform for consistent income. Society6 discounts are not given time limits, so your store’s revenue drops indefinitely.

3. RedBubble’s base prices are generally cheaper

With warehouses in six continents, RedBubble’s production and shipping costs are significantly cheaper than Society6’s.

On average, RedBubble’s products retail for $2 less while their shipping costs are 30% cheaper internationally. For artists, your products are shipped faster, which brings satisfied customers back to RedBubble’s website.

Society6 does, however, offer lower base prices on framed prints.

4. RedBubble has a better track record of paying merchants

To ensure customer satisfaction, you obviously want to be using a print on demand service which deliver great quality printed products. So which platform does better?

Unfortunately, it's almost impossible to compare them, given how large the product catalogs are, and how much difference the graphic design can make. If you trawl the internet for customer feedback, you have people on both sides of the fence.

Probably the most often compared items are T-shirts, which are still the best-selling print on demand items. In this category, RedBubble is more open about using ethically sourced fabrics and has decent quality base product options.

But when it comes to things like stationery, pillows, phone cases, and wall art, you never know which company will deliver a better product. Fortunately, as an artist, you won't be subjected to angry or dissatisfied customers–they'll blame the print on demand site.

Society6 or RedBubble: Which Is Better?

Ultimately, both print-on-demand services provide a fairly similar service. If you're an artist or designer that wants to sell your own merch, either site will make things easy for you.

As we covered throughout the comparison, there are advantages and disadvantages to both. For example, Society6 has a slicker new artist studio and lets you sell furniture. However, its artist commission structure is less flexible compared to RedBubble's.

If you have to just sell on one of the platforms, the decision should really come down to which site gels with your designs. Have a look through the marketplaces on both sites and see which one looks like a better home for your merch. The target audience of these two print on demand companies are slightly different, and you'll most likely do better on one than the other.

But the best thing to do is just list your work on both sites and see which one picks up. In fact, you can find even more print on demand services like Spreadshirt and Threadless that might be better homes for your art. You can try them all!

Another population option is to take full control of your business operation by managing your own Shopify shop and fulfilling merch using fulfillment-only print-on-demand services like Printful or Printify (read our comparison). This approach is more hands-on, but potentially more lucrative.